George Schneider and I decided that we needed some pictures of a Robinson taken in the air around Boston. I know George from when I instructed at Langwell Helicopters. I used to instruct in N2285Z, an orange R22 Beta. So one day George grabbed N2285Z, and I grabbed my Robinson and a photographer (Mike Shiwota), and we went and took some pictures.

Most of these pictures have nice shots of Boston, but the helicopter is hard to see. George and others thought it might be nice to actually get to see some closeups of the helicopter

Taking off from Nashua Street

We met at the Nashua Street helipad to discuss formation flight tactics, and how we wanted to proceed around the city. Here's George lifting off from Nashua Street: 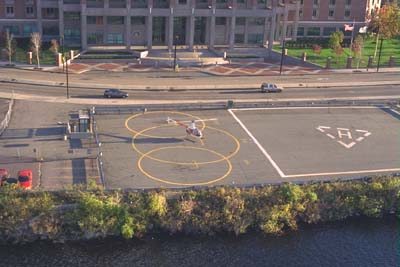 The helipad is built right on the edge of the Charles River, which is the water that you see in the foreground.

George performed his takeoff across the Charles in order to gain some altitude before turning on course. There's a bridge right next to the helipad which crosses the Charles right at the Museum of Science. 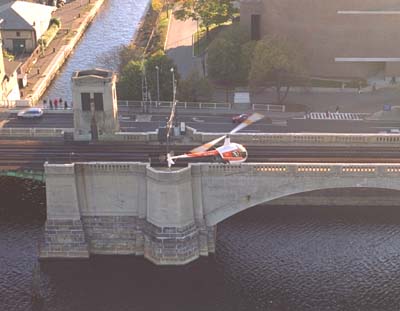 Climbout by the Museum of Science 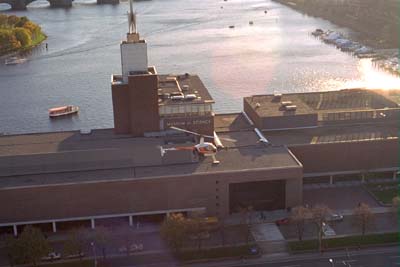 The Hancock and Prudential Buildings

In this photograph, the camera is over the Charles, shooting south. You can see George between the Hancock Building on the left, and the Prudential Building on the right. 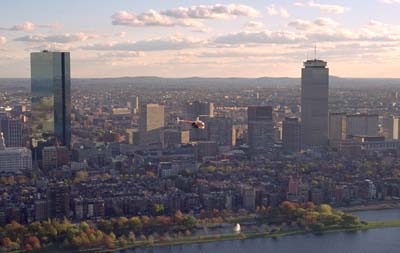 And here is a closeup of the Prudential Building: 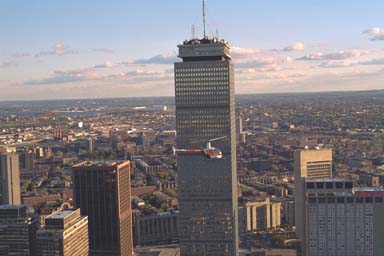 In this photograph, George is right in front of the new Hancock building. The old Hancock building is the taller of the two buildings slightly behind and below his tailrotor. The low section of buildings in the foreground are all in the Back Bay, which is all built on landfill. 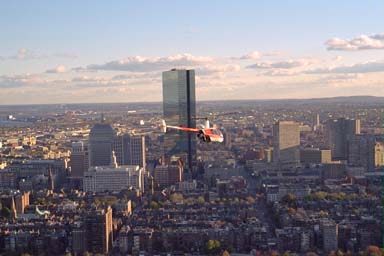 It just happened that we got a shot of this church. The tall, modern white stone building with the satellite dishes on the roof, as well as the domed building, and the building in front of the domed building, are all part of the Christian Scientist Church in Boston. Barely visible in this photograph, unfortunately, is the reflecting pool, which is quite striking. The Christian Scientist Monitor newspaper and radio programs are produced here. 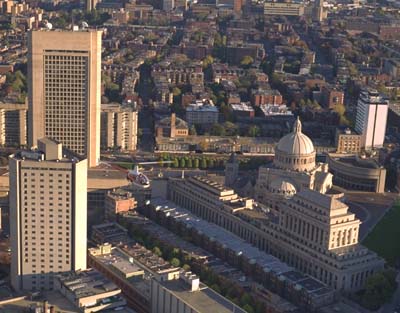 South Boston and the Harbor

This final picture is looking southeast over the harbor toward Hull. If we could see further in this direction, we'd be looking at Hyannis, and the base of Cape Cod. 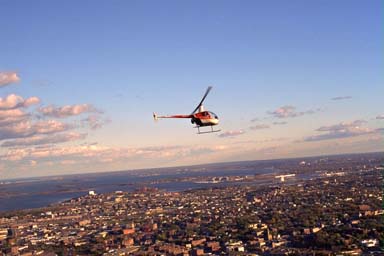 Paul Cantrell paul at copters.com (replace " at " with "@" to email me - this avoids SPAMMERS I hope)