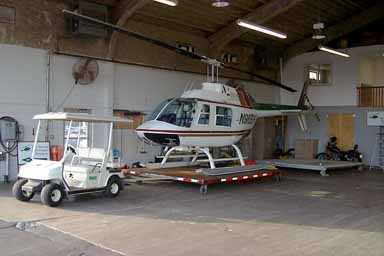 I've been flying out of Norwood for a while, and finally got around to taking some pictures of some of the aircraft I fly here.

We use this JetRanger for traffic reporting for WBZ radio here in Boston, and for tours around Boston, aerial photography, and just about everything else you can imagine. You can see it sitting on the dolly, which we use to pull it in and out of the hangar. We either use a golf cart or a lawn tractor to move the dolly when the helicopter is on it. 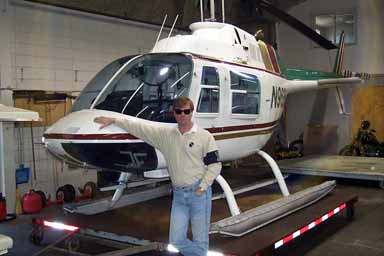 Sunday morning I was in the hangar when a friend showed up to go flying with Ivan. Geoff took his family on a Tour of Boston. 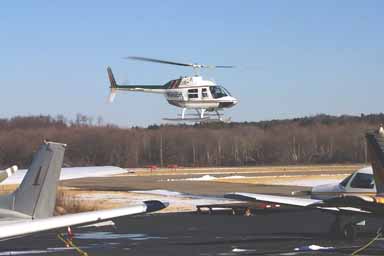 Here they're returning from their flight. You can just see the dolly on the ground below the airplane wing. 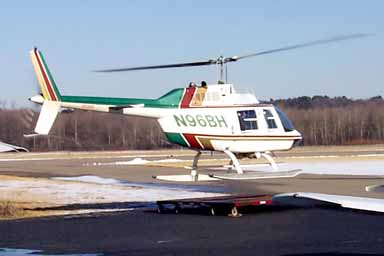 Landing on the dolly... 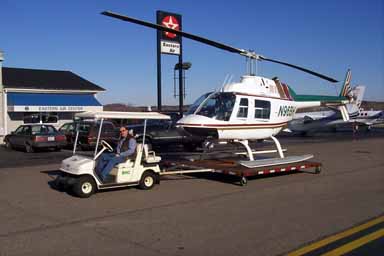 After the flight, Ivan put the helicopter back away until the next flight. Ramp space is very tight at the FBO here in Norwood, so we're often moving the helicopters around to make room for all the bizjets.

Starting R22s on a Cold Morning 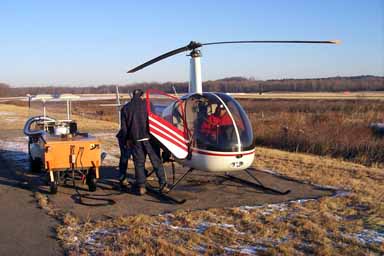 It was cold Sunday, and I noticed one of the Northern Lights instructors getting a battery cart start on the R22. This is more normal for a turbine helicopter, but on a cold morning with a weak battery, it's sometimes necessary for a piston aircraft as well. 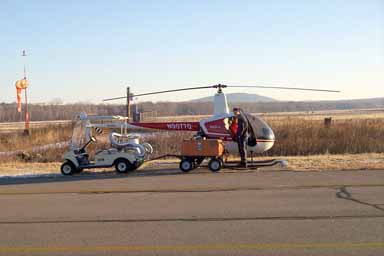 The FBO uses a golf cart to pull the battery cart, and you can sort of see in the picture that they also have a preheater on the golf cart. That can be used when the weather is really cold to get the crankcase oil warmed up a bit before starting the aircraft. We hangar all the helicopters, so unless they've been sitting out all day, the engine isn't usually that cold. 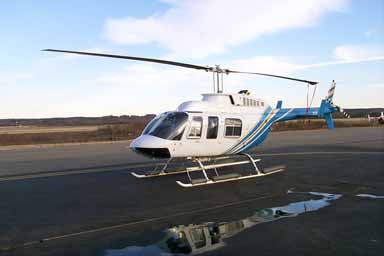 I'm lucky enough to get to fly this aircraft on a regular basis. It's an IFR certified LongRanger. A LongRanger is like a JetRanger that has been stretched to fit two more seats in the back, club seating style. IFR means we can fly it in the clouds (which is very unusual for single engine helicopters). 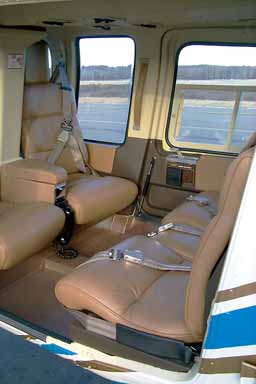 You can see the back seat here. The two seats on the left side of the photograph face backward, while the three on the right are the standard forward facing JetRanger seats. 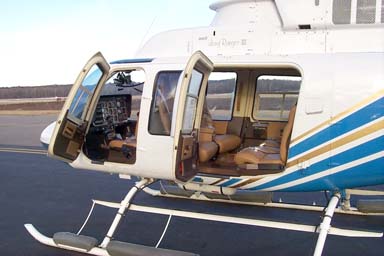 In this photograph you can see both the rear cabin and the cockpit. The aircraft is incredibly comfortable, and flys much smoother than you would expect, compared to a JetRanger. On a gusty day, it's just like riding in a stretch limo. 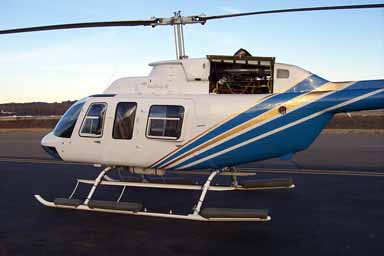 If you are not used to turbine helicopter engines, you can see in this picture just how small they are. 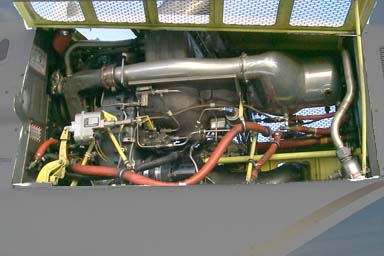 Here is a closeup of the engine compartment. 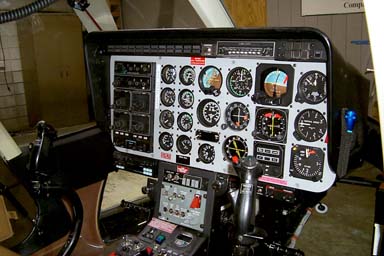 You can see in this picture that this aircraft has a much bigger instrument panel than a VFR JetRanger. This aircraft is equipped about as well as they come: dual attitude indicators, HSI, RMI, 3 axis autopilot, radar altimeter, DME, and a Northstar M3 Approach Certified GPS. 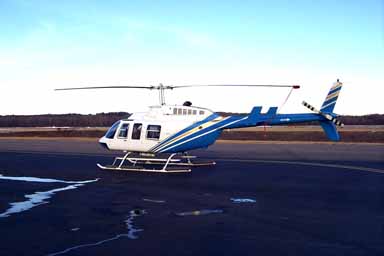 This is absolutely a fantastic helicopter, and of all the helicopters I've ever flown, it's my favorite. It's even nicer than the S76 I got to fly in Hawaii. I'll tell you about that soon...